According to ANSYS’ Global Autonomous Vehicles Research Report, 71% of consumers believe that autonomous cars are already better drivers than humans – or will surpass human abilities by the year 2029.

What do these numbers mean?

“This study shows that consumers are excited, optimistic, and trusting that self-driving technology will soon replace human drivers in a safe and efficient manner. 33% of consumers already believe that the current technology surpasses human abilities in some capacity. The industry must continue to make strides towards full autonomy and continue building confidence with consumers that the technology is fully safe and reliable.” – Peter Szelei, Director Of Business Development, AEye

AEye helps achieve the goal of full autonomy by incorporating the most successful parts of the human driving experience – the advanced mechanics of the human visual cortex – and mimicking it in their artificial perception systems. It’s the best of both worlds: human perception and robotic rationale.

The Value of Autonomous Cars

When humans are behind the wheel, we add emotional intelligence, intuition, and morality as influential factors to our decision making, empowering us to be dynamic and skilled drivers. However, as humans, we can also be subject to foibles like aggressive behavior, fatigue, distraction, or impairment when behind the wheel. We also tend to think we’re adept at performing certain tasks (such as driving) – even when we’re not.

In the United States alone, there are approximately 37,000 deaths per year due to car accidents. Of these fatalities, 11,000 (30%) are caused by drunk driving, 6,000 (16%) are due to distracted driving, and 1,000 (2%) due to drowsy driving. But humans can still sometimes make fatal decisions even when operating at full mental capacity.

The promise of autonomous vehicles is to take some of the safety controls out of the hands of humans, and give them to robots who don’t get drunk, tired or distracted. A robot (i.e. an autonomous vehicle) can more logically apply situational awareness to the task of driving, all while maintaining a safe and defensible space around the vehicle. Given adequate information about the environment in which they are operating, robots should make better, more consistently reliable decisions because they can’t get drunk, tired, or distracted.

By taking impairment, fatigue, and distraction out of the driver’s seat entirely, autonomous cars can save roughly 18,000 lives in the US annually. 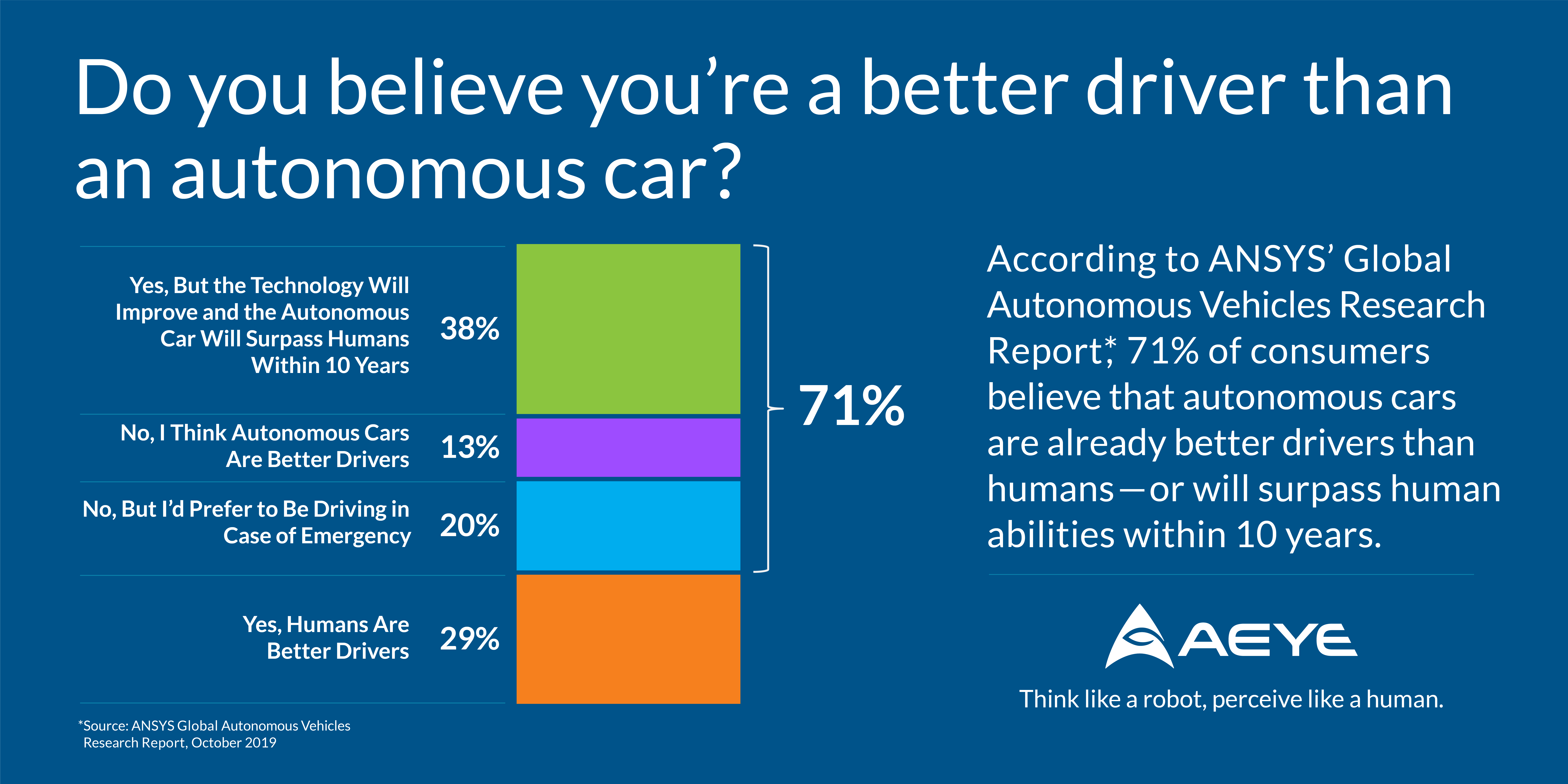 Do you believe you’re a better driver than an autonomous car? —
ANSYSSelf-Driving CarsSelf-Driving Vehicles

Related Articles
AEye is an artificial perception pioneer and creator of iDAR™, a new form of intelligent data collection that acts as the eyes and visual cortex of autonomous vehicles. Since its demonstration of its solid state LiDAR scanner in 2013, AEye has pioneered breakthroughs in intelligent sensing. The company is based in the San Francisco Bay Area, and backed by world-renowned investors including Kleiner Perkins Caufield & Byers, Airbus Ventures and Intel Capital.
Copyright AEye, Inc. 2020 - All Rights Reserved.
Back To Top ← The Human Classification Framework: Search, Acquire, and Act